I wanted to see Minako otageing to Sphere songs too… 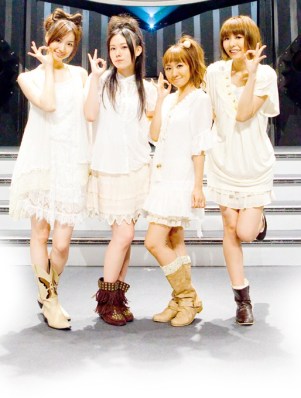 This is a bit of a rare post coming from me, but I just had to share this little adventure of Mina-chan because, well, I was actually rather touched. To put it in a nutshell, what happened was the following: Kotobuki Minako was spotted at a screening for Sphere’s rings live tour 2010 FINAL in a theater in Shinjuku.

So what’s so awesome about that? Well, think about it. How many artists would actually dare mixing in with their fans and watch their own concert along with them? I’m sure someone’s done something like this before too, I’m just proud of my Mina-chan for doing this too *fake tears* Or maybe she was just being her usual thick self?

Anyway, I figure the best way to showcase this is by translating both Minako’s blog post about this, as well as the post of a lucky 2ch anon who happened to spot her at said screening.

The truth is the other day, I went to have a look at
“Sphere’s rings live tour 2010 FINAL”
at the theater where it was being screened★

Coincidentally the work I had that day,
was finished earlier than expected so,
hurriedly with mr. manager,
we decided to go watch!

Just… Amazing!! lol
the 3D picture and the 5.1 sound
everything was amazing.

What moved me more than anything else was,
everyone who was at the live
flew out from the picture,
one by one clearly
I could see them!!

Since when I went to watch it was a standing while watching performance,
in truth I also held with me a lot of cyalumes,
and waved them in accordance with Sphere’s songs!!

But everyone is,
while baring with this pain,
waving their cyalumes so
I also have to try my best! Is what I thought.

Throughout the whole thing, very deeply
I ended up crying.
Even though I’m a performer… ;_;

Once again to everyone,
thank you very much!!

For those who watched it, and for those who didn’t watch it
by any means I want you to watch it many times (*^^*)

Minako appeared on 12/4 (Saturday) at Shinjuku Baltic 9’s screen 3, at the 18:30 round.
Barely on time for the curtain raising, in the middle of the darkness, a middle aged man and a mask-wearing semi long girl came in.
While looking at the screen, they went to the right side furthest to the back which is where I was and sat in front of me.
Is it Minako perhaps? Is what I thought and paid more attention to that rather than the screen.
And so at the time of swinging the penlights her swinging was different from the rest of the spectators, in other words she was swinging in accordance to the performers but realised that halfway through and started swinging in accordance with the spectators.
For every song and every member she had the matching cyalumes but a lot of the time she waved all 4 members’ colors in her hand.
However, that way of waving despite being done with utmost effort was still somewhat awkward.
Yet when the movement copying (it’s the person herself so it’s not really copying though) was done it was done sharply with perfect movements.
During SuperNova obviously she timed the salute with Minako’s.
I can’t confirm the part about the crying but the fact that she clapped and cheered with all her might is what got transmitted to me.
With this much circumstantial evidence left behind, just before the Budokan movie was over, she left with the middle aged man.
That is all.

And so there you have it. Minako’s little adventure slipping “unnoticed” into the crowd and watching Sphere’s live. Man if I were the person who wrote that report I’d have tried following her out-